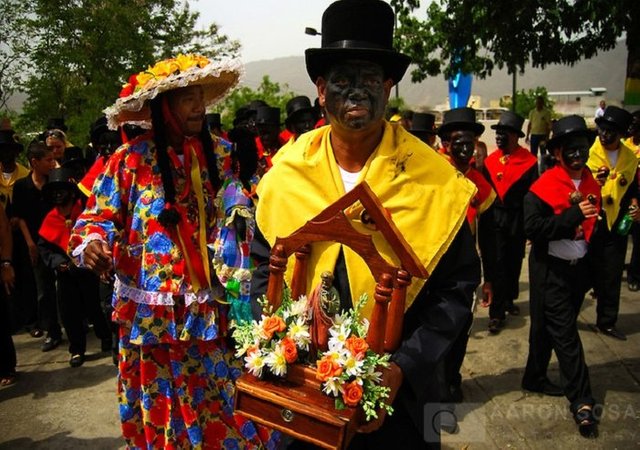 San Pedro festivity begins mid-nineteenth century as a mockery of the political struggle between liberals and conservatives.

Painting their faces in black with shoe polish and dressed in frock coat and top hat accompanied by cuatro and maracas. The most striking character is a man dressed as a woman who carries a rag doll. This character is called Maria Ignacia and the doll Rosa Ignacia.

The legend says that Maria Ignacia was a slave and seeing that his daughter Rosa Ignacia was not healing from a high fever, asked San Pedro to intercede on her healing, and if he did, she promised to dance and sing to him every 29 June. Maria Ignacia became ill and her husband trying not to break the promise decided to wear her clothes, bulge his abdomen with rags to simulate pregnancy and celebrate.

This festivity was proclaimed Intangible Cultural Heritage by UNESCO in 2013.